﻿For many years I have been involved with scrimshaw art & design and its development and history. Through the years I have enjoyed the artistry of scrimshanders both well known as well as those just beginning their journey. They were my inspiration and influential to my creative growth.

﻿I learned about Scrimshaw in the summer of 1979 while employed at a railroad tank car lining shop. The company hired an outside firm, a track laying crew to re-ballast and lay new track in our switch yard. In their employ was a young man, a self-professed gypsy whose name was Alphonso. He preferred to be called Ringo because of the rings he carved out of deer antler.

He easily carved out rings in eight or nine hours. He started by reaming out the marrow and then finished by carving a figure onto the outer surface. Fascinated by his handiwork we quickly became friends and he taught me how to carve rings too. A couple of weeks prior to his crew completing their re-ballasting contract Ringo brought up the subject of scrimshaw and intrigued, I began asking lots of questions about this art form. His knowledge of scrimshaw was the spark that set me on the road to becoming a scrimshaw artist.

Before long I decided to try my hand at scratching a scene onto a ring. Being self taught I was very timid at first but my courage and my hand grew steadier over time as I began to learn the skills involved. Through conversations with other scrimshanders and comparing my work with theirs I knew I had come a long way and was on the right track. Since I had never taken any graphic design or fine arts courses during my school years I felt as though those early beginnings were an exercise in confidence building which has stood me in good stead through the years.

I scrimshawed everything from deer antler and Micarta to Corian and French Ivory. Those materials proved to be good learning canvasses. My skills improved so much so that in the late 1990's I finally felt justified in switching over to genuine ivory.

The main tools of the trade that I've grown accustomed to are a needle and pin vise that I use for scribing and a jeweler's loupe that attaches to my eye glasses. You can see an example of a pin vise in the photo of Penny below and an example of my latest piece, "Fair Winds And Following Seas."

I also have a Gravermeister with a handpiece which often comes in handy for shading. I prefer employing the stipple technique along with line-scratch work for my scrimshaw. 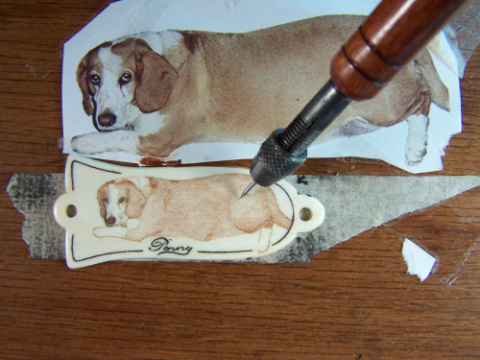 Close up of Penny's face 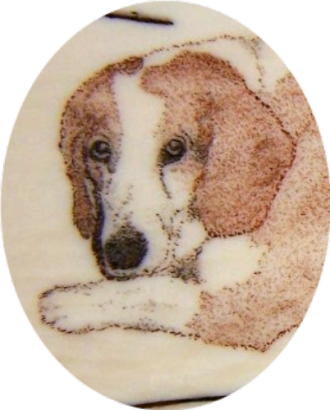 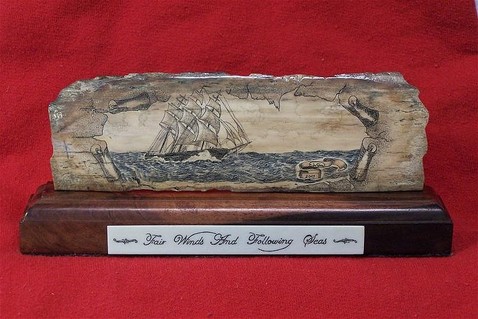 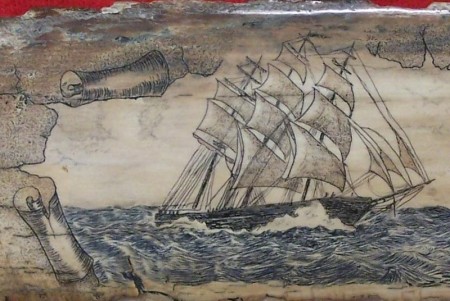 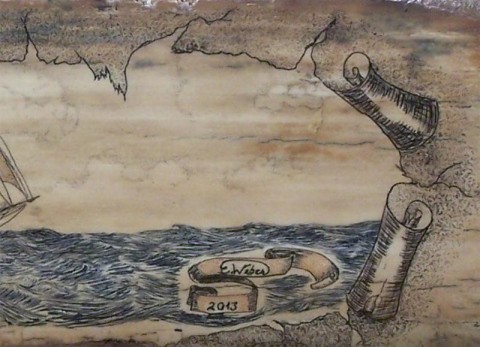 Whatever you do, do your work heartily, as for the Lord rather than for men. ~ Colossians 3: 23

~Scrimshaw of the month~

﻿"Courage is about doing what you're afraid to do. There can be no courage unless you're scared." ~ Eddie Rickenbacker

I'm pleased to announce & introduce my new, Ed Weber Banjo! Click on the link above or click here to read all about it and scroll down to view photos in the gallery provided.

All of my photo galleries offer large, clear photos of my work. Be sure to click the button with the arrow in the lower right-hand corner to expand the gallery.