My scrimshaw career came gradually in phases over the years starting in 1978. But my love for the banjo began much earlier and making music was something I threw myself into heart and soul.

I began my musical career in 1967 when I learned to play the guitar. I learned fairly quickly and in 1969 I jumped into my first performance at the Why Not Coffee House in Rock Island, Ill. But I was so inexperienced and nervous that all I could do for ten minutes was tune my guitar - in front of the audience no less! I was so embarrassed I left the stage with my tail between my legs.

Embarrassed or not I was determined and not long afterwards I teamed up with my friend and fellow guitarist, Stu Stuart who would become my musical partner for the next 25 years. He and I put together the first of several bands to come.

I played guitar back then. Although I purchased my first banjo in 1972 it wasn't until 1978 when I became a member of The Schell Brothers Bluegrass Band, that I really began to learn how to play the banjo.

Throughout the 70's and 80's, the bands and band personnel evolved from Folk (Stone Free Road), to Country & Western (Mr. Greenjeans), to Country/Rockabilly (Greenjeans without the “Mr.”), to Country Rock (Walkers Reunion), to Bluegrass (Pathfinder).﻿ 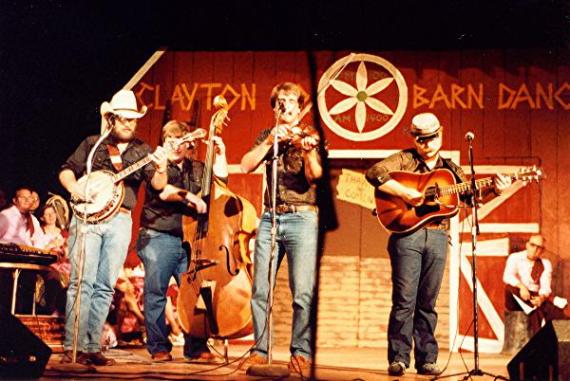 Being a songwriter I wrote many of the tunes we played during those years. My band had a nice run at the "big time" when we moved to Nashville in the mid 80's. Our producer changed our name to Don Juan when we were added to the roster of an independent label, Maxx Records. We were groomed and billed as a country pop/rock act - quite a change from Bluegrass!

I was writing a lot in the "Don Juan" days and I had several of my songs cut on custom recording sessions down on 16th Avenue.

Some of my songs were pitched to major artists and a couple of my tunes were on hold with Reba McIntire and Phil Collins. But a song on hold means nothing unless you get it cut. No "cuts", no glory - pun intended!

We enjoyed a measure of success releasing and charting two singles in the Top 50 in Cashbox and the Top 100 in the bible of the music industry, Billboard Magazine.

In fact we were the first act on an independent label to have ever charted a song in Billboard Magazine, a feat unheard of in those days and to the best of my knowledge yet to be repeated. We were also the first "Indy" act to market and sell compact discs which was unusual during those early days. It was a little unnerving after moving from being the big fish in a small pond to the little fish in an ocean of competition for air play and rack space at record stores.

Touring and promoting our record, we attended all the obligatory radio and television interviews as well as appearing at Fan Fair and the CMA's 25th anniversary show. Being successful in the music business is a hit or miss proposition. There's an old adage that states 'you can do everything right and fail or do everything wrong and succeed. Either way it takes a lot of money to make money and without fuel the engine comes to a grinding halt. After three and a half years of giving it a go Don Juan disbanded and we all went our separate ways in the autumn of 1989.

Throughout the 80's I gradually switched from guitar to playing banjo exclusively. In 1989 I went to work for Gibson Guitar Co. and for the next twenty years I took a lot of pride in building banjos for the people whose music I loved to hear on the radio, and the good folks who just enjoy playing music with family & friends. During this time I put together a new Bluegrass band, Emergency Bluegrass, and later went to work for the Tipton Family.

In 1998 I became discouraged with performing and quit playing my banjo. In the autumn of 2005 I felt the old urge again to pursue music but I was completely out of musical shape. It took me nearly three years of daily practice to shake off the rust before I could hold my own with other musicians.

Throughout those years leading up to the present I decided to explore new avenues with the banjo, mainly Big Band jazz and swing music. Switching from Bluegrass to jazz/swing is an ongoing endeavor although I continue playing Bluegrass, too. Oddly enough I have found many similarities between the two genres.

I currently have a new band called W.J.A.Z. which you can guess by the name is a jazz band. It's the songs from the Great American Songbook of the 30's and 40's that interest me the most and it's a load of fun to play them on the banjo. Now, Ain't That a Kick In The Head?

Wonderful music and a great challenge! 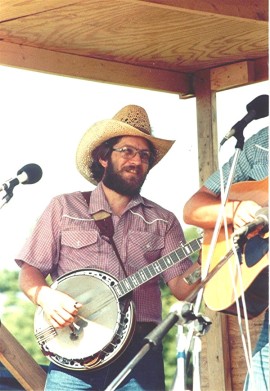 After leaving the road as a musician in 1989 I secured employement at the Gibson Guitar Co. in Nashville, TN.

I started out as a neck fitter fitting necks to all the various models of electric guitar bodies. Within the first year I was promoted to the Banjo Department. During my twenty years of employment with Gibson - July 17, 1989 to July 17, 2009 - I was indeed truly blessed to be a member of the team that built the finest banjo ever made.

My job entailed all aspects of neck production which involved shaping the neck, fretting, binding, installing the nut and side dots, and customizing the neck with added marquetry and abalone. I also turned resonators and rims on the lathe adding binding and abalone as each particular model required.

Through the years I have built every style of Gibson banjo from the no-frills RB-1 to the classy RB-6 Gold Sparkle model and the elegant Earl Scruggs Special. From the work horse RB-250 to the top tension models and All American, Florentine, and Bella Voce I've built them all.

In the photographs below I'm working on a Granada Flying Eagle banjo neck using a specialized belt sander called a nose block or bull nose sander: 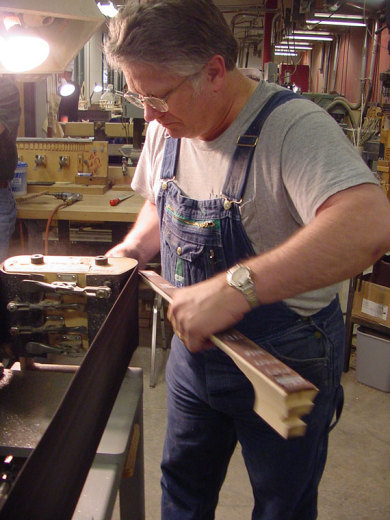 Working the neck with a 12 inch half-round bastard file... 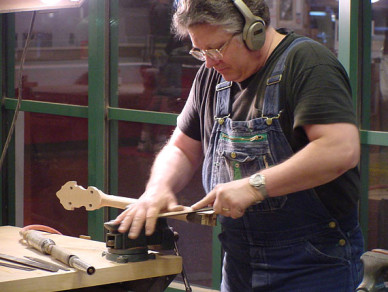 ....and spindle sanding the neck:

When we decided back in the late 90’s to build a brand new model for Earl Scruggs, I suggested we name it after a famous instrumental he wrote, the "Flint Hill Special." Earl approved of the name and gave it his blessings. Many years later I got to name the newest model for the Earl Scruggs line of banjos, “The Earl.” Again, Earl gave us the go ahead. With 24K gold-bound MOP inlays and 24K gold side dots and a portrait of Earl on the back of the resonator “The Earl” is the most prestigious Earl Scruggs banjo we ever built.

Whatever you do, do your work heartily, as for the Lord rather than for men. ~ Colossians 3: 23

~Scrimshaw of the month~

﻿"Courage is about doing what you're afraid to do. There can be no courage unless you're scared." ~ Eddie Rickenbacker

I'm pleased to announce & introduce my new, Ed Weber Banjo! Click on the link above or click here to read all about it and scroll down to view photos in the gallery provided.

All of my photo galleries offer large, clear photos of my work. Be sure to click the button with the arrow in the lower right-hand corner to expand the gallery.